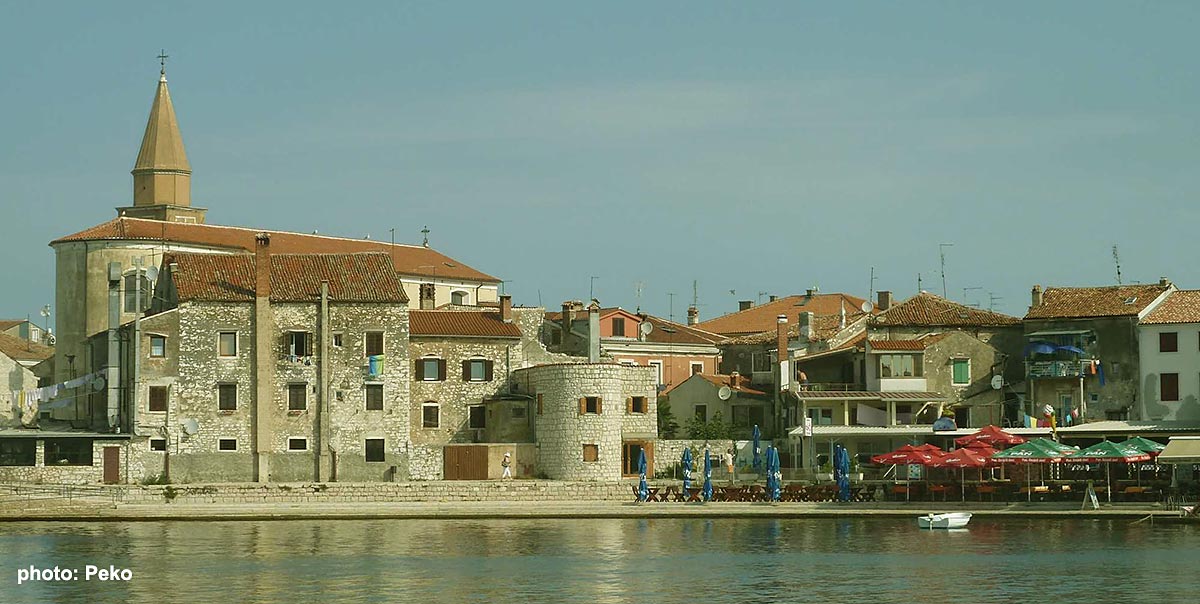 The clay of Umag

To many people outside the sports milieu, the mentioning of the city of Umag will not ring a bell. Nevertheless, Umag is certainly going to stay in pretty memories to Guillermo Coria, Carlos Moya and Stan Wawrinka. What do these tennis legends have in common? Well, all three of them won the renowned tennis tournament held in Umag annually.

The clay of this Istrian city attracts many great tennis players, as well as tourists, and presents another gem of the Croatian coastal array of cities.

Located in the western part of Istria, in the vicinity of the Slovenian border, Umag is home to some 14000 people. Its position is characterised by coastal Mediterranean influence. Even though the entire region of Istria is rich with the fruitful soil, it is the area of Umag that takes the biscuit with its abundant and various vegetation specimens. The climate is very mild, the temperatures go way beyond 25 degrees Celsius in the summer, whereas winters are extremely pleasant.

It is believed that Umag owes its name to the old Celtic word “mag”, which means fruitful soil. It was formed as an island, gladly visited by the members of the Roman aristocracy, who used to build villas here, some of them still standing proudly in the city area. However, the town was relatively unknown territory for centuries.

The first recording of the city dates back to the 7th century. Nonetheless, it goes without saying that Umag was inhabited in the time of the Roman Empire, due to the remains of a famous villa-rustica, or an open villa built by members of the elite part of the Roman society. The early history of Umag and its neighbouring settlements were marked by pirate raids, yet the position of the city, which is basically a tiny island that is divided from the rest of the land by a channel was very suitable and helpful for the development of the city, as it was protected from continuous pillaging enterprises done by wild tribes all over Istria. The period of the Roman rule was the age of prospering for Umag. Still, the fall of the powerful Empire gave way for a breach of the aforementioned wild tribes such as Huns or Ostrogoths. Umag was relatively spared from their attacks but ultimately fell under the reign of Langobards. As the story with Istria usually goes, Langobards were replaced by the Byzantine Empire, and that was also a period of progress for Umag. Byzantines disappeared from the stage of history as well, and their successor was embodied in the people of Franks. the coming of Franks meant a start of a very turbulent period of Umag, as its clergy and aristocracy struggled for dominance in a process that lasted for centuries. Finally, the Republic of Venice claimed the territory of the city, as it did with many other Istrian towns and established the dominance that lasted for five centuries, all the way to the end of the 18th century. The Republic of Venice chose governors and settled all important issues in Umag. This was a difficult time for the city, especially in the beginning, as it experienced series of misfortunes mostly embodied in gusts of diseases, especially plagues, which took a considerable amount of lives among citizens of Umag.

The beginning of the 19th century brought radical geopolitical changes in Europe, and that applied to Istria as well. Rare were pieces of Europe that were not clasped by the mighty hands of Napoleon, and Umag was no exception to that rule. The fall of Bonaparte put an end to the French influence. This opened the gate for the Austro-Hungarian Empire which took control over Umag in 1815 and immediately started improving its infrastructure. However, it seems that nobody had the claim to Umag for an extended period of time, and thus WW1 came along and Austro-Hungaria was swept off the face of the Earth. Mussolini’s Italy saw its chance there and annexed Umag in 1918. This period was marked by the extensive social turmoil, as the citizens of Istria, in general, were not satisfied with the forceful annexation. The rise and unification of the Slavs gave birth to the Yugoslav pretensions regarding this territory and the end of WW2 brought the infamous division of the Istrian region and the so-called “Zone A” and “Zone B”. It was not until 1954 that Umag officially became part of Yugoslavia, and ultimately Croatia.

Many visitors come year after year here for various reasons. Some of them are tennis aficionados and come to watch the tennis tournament (www.croatiaopen.hr). Some of them come to relax on the beautiful beaches and enjoy the bright, blue sea.

Moreover, Umag has a lot to offer when we speak about cultural events and monuments. First of all, there is the core of the old city, a classic example of the medieval architectural style. Besides strong walls, there is a bridge which was built in the 10th century.

The town takes pride in its astonishing churches built between the 14th and the 16th century, such as the Church of Saint Rok, the Church of Saint Nicholas, the Church of Saint Mary and so on. The town is also home to Marin Gallery, which presents an oasis to the contemporary art exhibits. Umag is the host of many cultural events, such as the Golden Lion Theatre Festival and Organum Histriae, a movement created in order to preserve and pass on the tradition of the organ as the musical instrument.

Most of the income that area makes comes from tourism and there is no surprise there. However, because of the arable land, the area of the city is known for its agricultural character, most notably regarding nurture of olive and grapes. This region is known for fine wine and celebrated fishing tradition as well. The town is also home to “Podravka”, a giant in the department of the food industry. Its products are used on a daily basis by millions of citizens of Croatia and neighbouring countries.

All in all, this may be a little place, but it holds many secrets and surprises. Just ask tennis players from the beginning of the story – they went all around the world, yet gladly returned to Umag in summer. Now, how is that for an advertisement?

Getting there by bus:

Umag it is well connected by buses from nearby places in Istria as well as from Croatia’s main towns Pula and Rijeka and  Trieste and Venice, Italy.