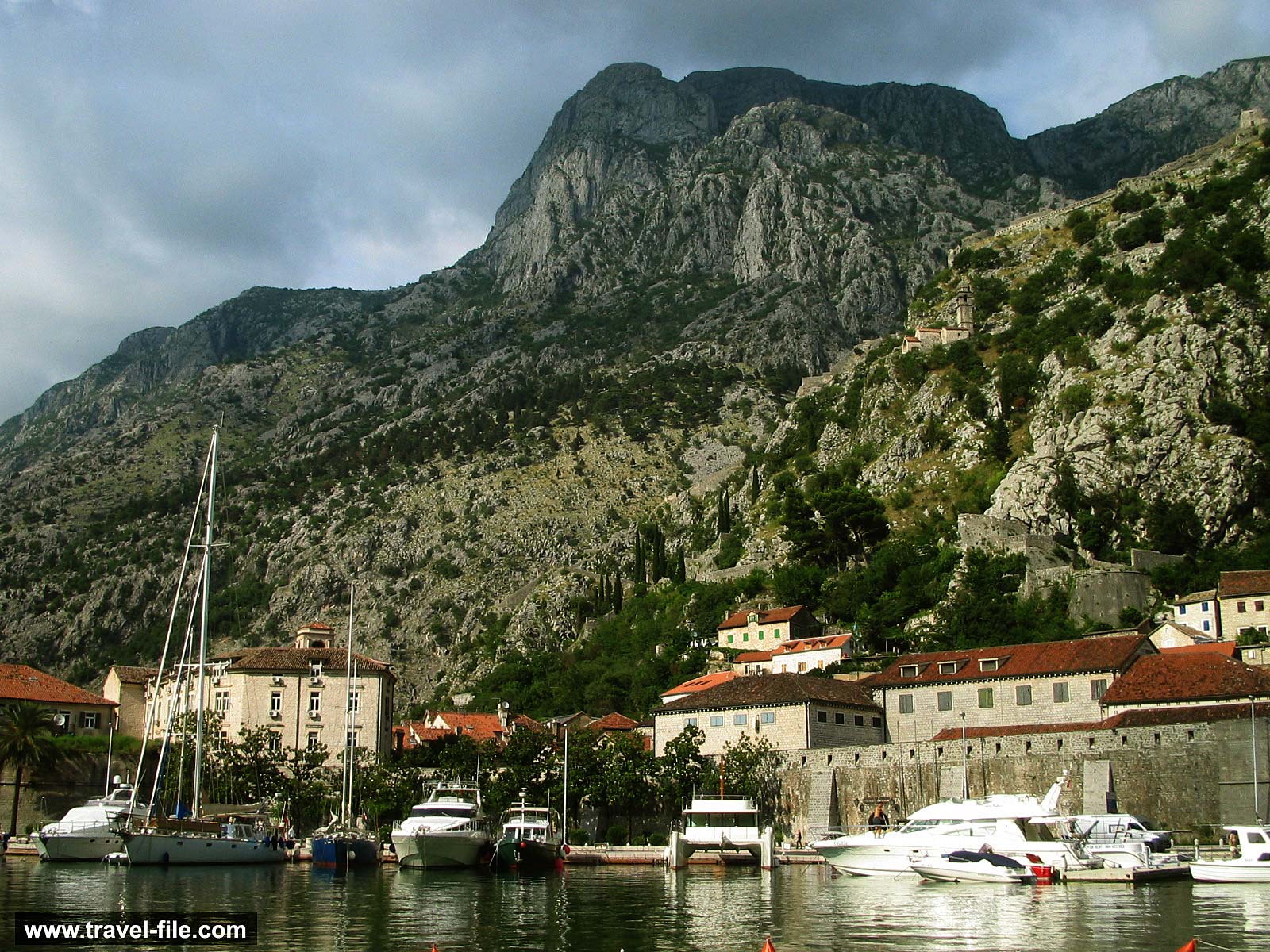 Views over Kotor bay; Getting to Kotor: see buses to Kotor

Kotor in a nutshell

In the time of increasing awareness of the stunning seaside resorts, countries like Montenegro seem to be somehow overstepped which is a great shame when one comes to think of what this little country at the Adriatic Sea can offer. Among its best representatives is Kotor.
Kotor is a relatively small town located in the Gulf of Kotor. It presents one of the biggest tourist attractions in the region, mostly due its medieval feel and touch. This town was under Venetian reign for almost four centuries which is still seen in the architecture of the town.

Things to do in Kotor

Kotor is one of the most visited sites in entire Montenegro, both for its cultural appeal and the range of activities it offers. A lot of tourists come to Kotor and its near islands and islets to use the magical beaches, virtually spotless and renowned for their quietness. Thus, it can be said that swimming is a number one on the list of activities around. Furthermore, Kotor is a right place for cycling fans. Many cyclists found great joy in exploring challenging steep paths that decorate the Bay of Kotor. Besides cycling, there is a great opportunity to use the streams of Kotor Bay and make exciting kayak tours which are remembered long after leaving Kotor. In the end, it would be a shame to leave Montenegro without going for a hiking trip to Lovcen. The enchanting wilderness and the presence of many rare species entices everyone to go for a demanding, yet satisfying hike. On the other side, for people who do not enjoy outdoor activities, Kotor offers exciting nightlife in the “Maximus”, a famous club with a great view on the ancient fortification structures, such as citadels and towers.

Latest about Kotor on Travel Forum:

Kotor is an extremely attractive tourist attraction when it comes to architectural feats- this town is blessed with the presence of many edifices that last for centuries and yet leave many visitors in awe.
Kotor Cathedral is certainly one of the first associations to Kotor. It was built at the very beginning of the 9th century when Andrea Saracenis, one of the most notable residents of the city, bought the remains of Saint Tryphon and decided to build a cathedral in his honor. The cathedral was built in Romanesque style, but it is interesting that it has many elements from the more recent epochs. The reason for this lies in the fact that the cathedral was thoroughly damaged four times in earthquakes, and each new reconstruction was marked by the addition of new architectural elements. Its lavish frescos were painted by the Greek painters in the 12th century.

Maritime Museum is located in the central part of Kotor and presents one of the most appealing cultural attractions in the city. The building itself was built in baroque style. It was owned by the noble family of Grgurins. Its origins go as back as to the end of the 19th century. This cultural monument was initially opened for public in 1900 and went through many reconstructions prior and after WW2. However, the museum was especially damaged in the devastating earthquake in 1979, which led to a five-year hiatus in the work of a museum. Nevertheless, it was reopened in 1984.

Kampana Tower along with the citadel is a part of medieval fortification system built in Kotor. This system is probably the brand of Kotor and the part which gives it the unique feel which attracts so many people every year. The tower was built in the 15th century and it was initially conceived as an independent fort. It had its own staircase and a wooden bridge. Nonetheless, in the centuries to come, the structure of Kampana was reorganised and it was strengthened with additional walls that connected the entire defence mechanism. Still, the great earthquake of 1667 did some harm and parts of the walls around the tower collapsed. The ruins can still be seen from the nearby club.

Lovcen is one of the most interesting mountains in the region, if not in Europe. Its peculiar structure with many depressions and slopes made it home for various rare species of plants and animals. At its second highest peak called Jezerski vrh, a mausoleum dedicated to Petar Petrovic Njegos was built. This mausoleum is a resting place for Njegos, the ruler of Montenegro in the 19th century. It is renowned for its massive caryatids which represent Njegos’ family members. Lovcen is also home to a big national park, famous for its endemic species, old shepherd houses and the extremely meandering paths called serpentines.

Our Lady of the Rocks is a peculiar artificial island, or an islet, built in the 15th century which carries a lot of symbolism. Its origins are somewhat mystical- according to an old tale, it was built when two brothers found an icon of Virgin Mary, which led residents to build a church dedicated to her. The church, as it is today, was built by Venetians in the 17th century. It is characteristic for its archaic look. This church, as well as the island itself, is the home of the famous annual tradition, called fasinada, in which the residents come and throw stones around the islet, thus increasing its surface.

Sveti Djordje (Or the Island of Saint George) is an island next to Our Lady of the Rocks, but unlike its neighbour, it was formed naturally. It is also located near Perast, at Kotor Bay. What with its separation from the rest of the land, it resembles a remote fairy-tale island, even though it is very close to the mainland. The abundance of cypresses and the presence of the old graveyard for the members of nobility provide the touch of mysticism, if not spookiness of the island. It is also famous for a Benedictine monastery, whose construction dates back to the 12th century.

Sveti Marko is the island in the vicinity of Miholjska prevlaka. This island is connected to an ancient legend. According to this legend, it was given as a gift from Gods to Greek soldiers who showed great courage nad integrity in battles. The soldiers were stunned by the beauty of the island and decided to renounce their military career and stay there for good. They even planted an olive as a token of peace and a pledge to non-violence. The soldiers broke the oath and were brutally punished by gods who sent a great storm that killed the majority of residents, while the rest caught an incurable disease. The only thing that left was the olive tree. Sveti Marko was famous for its clean and beautiful beaches. Until the war in Yugoslavia, it was possessed by Club Med.

Miholjska prevlaka or the Island of Flowers, is one of three islands in Tivat Bay which form the so-called Archipelago of Krtolja. It is located just near the Island of Sveti Marko. It owes its name to a monastery dedicated to Saint Michael, which was the set as a centre of the regional Eparchy of Zeta in the 13th century. Unfortunately, this monastery did not survive the numerous centuries. However, the island takes its pride in the church dedicated to the Holy Trinity that was built in the 19th century. Interestingly, the island was closed for the public in the time of Yugoslavia, as it was a military resort.

The weather provided by yr.no