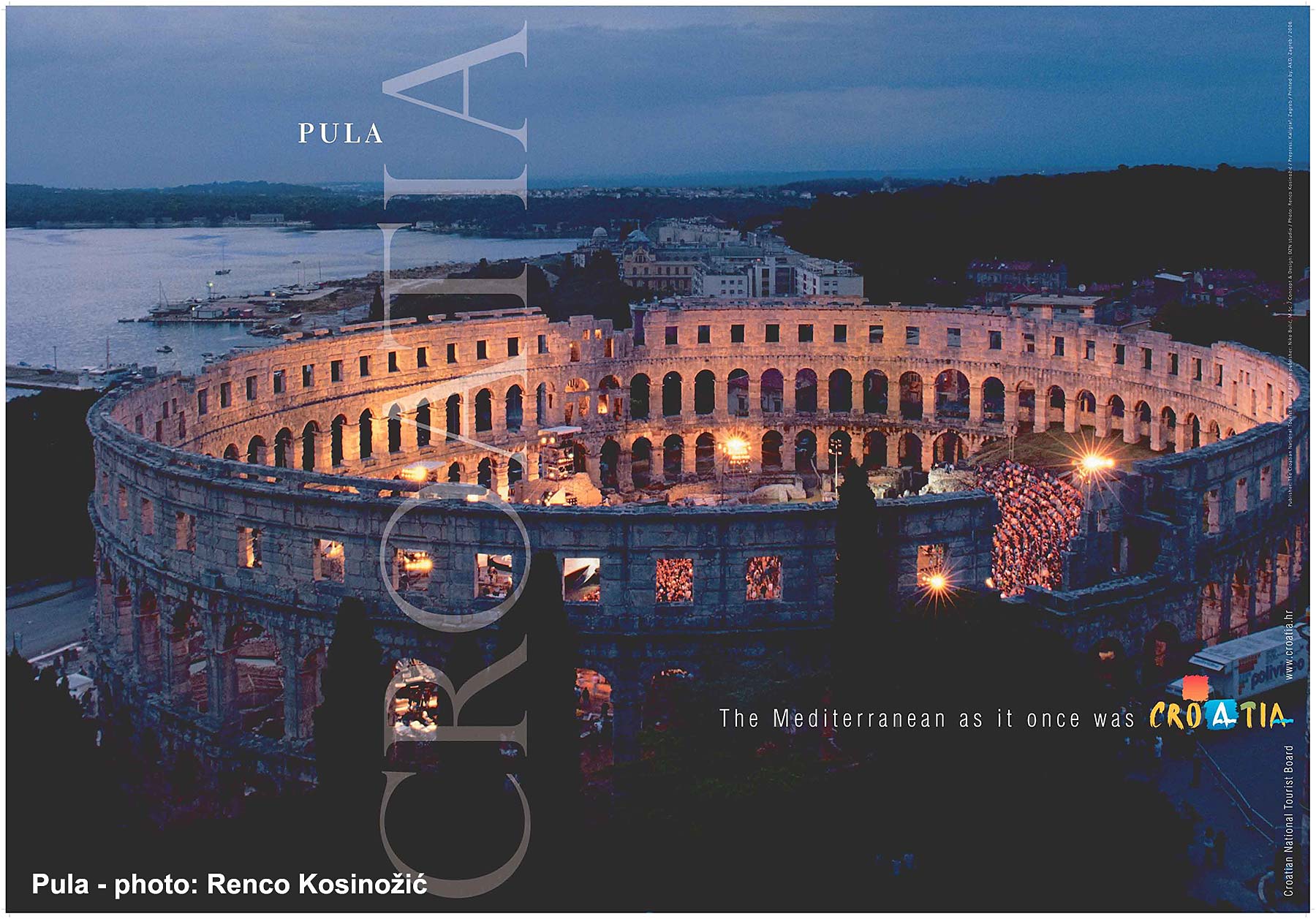 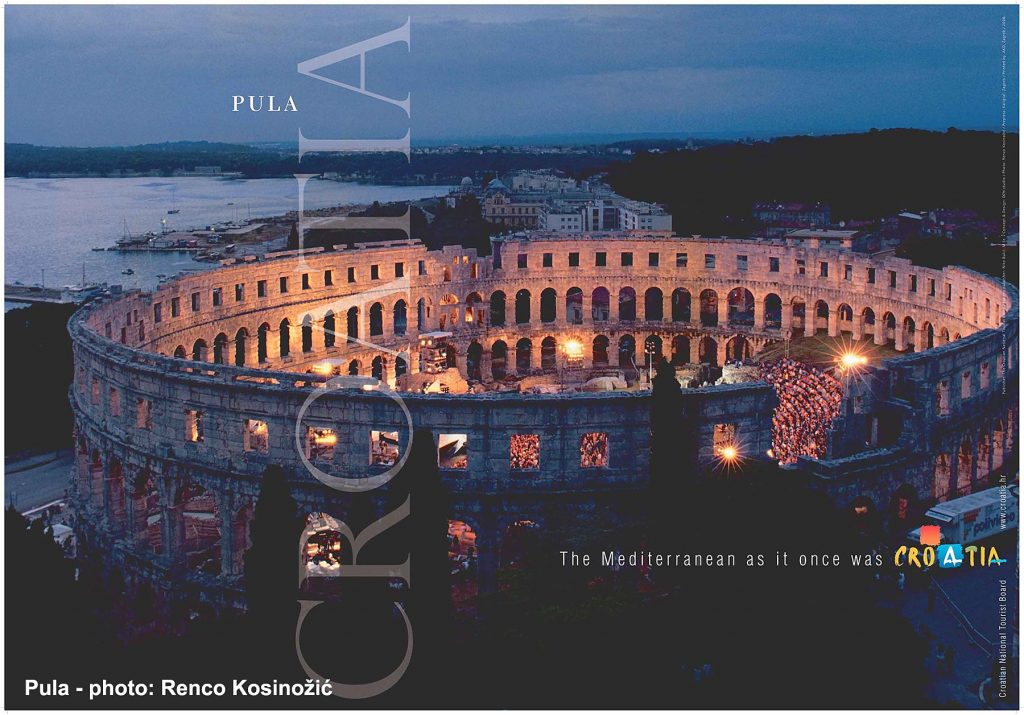 Located in the south of Istrian Peninsula, Pula presents the leading city of the county. With the population over 50 000 citizens, it takes the eight place in the entire country. Pula lies in a very safe port and is protected by seven hills, a fact of importance for various conquerors who made their journey throughout the Balkans. In the north it is surrounded by islands of Kozada and Sveti Jerolim. Due to its surrounding hills, as well as the massive of the Alps which encompasses the region, the town is a very agreeable place to stay in terms of climate. There may not be as many sunny days as in say, Porec, but there is hardly a resident of town who would complain about the lack of warmth.

Gladiators and presidents – History of Pula

As for the history, Pula is no exception to the rocky road of conquests around Istria. The area of the city is said to be populated even in the age of neolith and there are traces of the presence of the Illyrians in the 10th century BC. Pula is even mentioned in the ancient Greek myth of Jason and Medea. The legend tells the famous story about the theft of the Golden Fleece. When Jason took the Fleece, settlers of Colchis started chasing him all the way till the north of the Adriatic Sea. Nonetheless, as they were unable to catch Jason, they were too afraid to go home, and they founded the city of Polai, which means “The city of fugitives”. Legends are one thing, but the presence of the Greek pottery and a part of the statute of Apolo may confirm the origin of the city.

And after Greeks – Romans, of course. The mighty empire took over the whole peninsula in the second century BC. This was a crucial period for Pula as it became an important port and reached a high level of prominence, as well as the staggering population of 30000. The town got in the middle of the showdown between the emperor Augustus on one side, and Ceasar’s assassins Cassius and Brutus on the other. The city stood by Cassius, as his brother built the city. This proved to be a bad decision, as Augustus accomplished a complete victory and razed Pula to the ground. Nevertheless, on demand of Augustus’ daughter Julia, the city was reconstructed and embellished with the water system and canalisation.

The fall of the Roman Empire meant the breach of wild tribes, and Istria could not be saved on that path. Ostrogoths came first. They pillaged Pula in the process that lasted for 60 years. In the sixth century AD, Pula became a member of the Byzantine Empire. The pattern from there remains similar as with the rest of the region- after Byzantium, Franks took over all the way until the 12th century, when the Republic of Venice set its paw on Pula. Their rule lasted for four and a half centuries, a period in which Pula underwent through a lot of pillaging, destruction and diseases. Finally Venice went bust in the 19th century, when Napoleon conquered Pula in his brief military bravado. Ultimately, Pula became a part of Austro-Hungaria, then Italy, followed by Yugoslavia, and finally Croatia.

In the time of the Austro-Hungarian Empire, Pula regained its former glory, as it became protected port and the center of the shipbuilding industry. The age of Italian reign was marked by incessant social riots, which continued after the end of WW2. United Nations went through a lot of trouble with the Pula and whom should the city belong. It was divided into two zones, but that did not work. Various political games took place in Pula and finally, as of 1954, after London memorandum, Pula officially became a part of Croatia.
Shipbuilding industry remains the main activity in Pula. Its openness to foreign influence made the town perfect for the blend of various Mediterranean elements, so it is not unusual to hear Italian and German in the city. Many renowned artists came to live in Pula, including a great Irish writer, James Joyce or German scientist Robert Koch.

The town is abundant with many interesting sites that draw the significant amount of visitors every year. The famous monument is  Pula Amphitheatre (Pulska Arena). This is a real amphitheatre which served as a home of gladiator events. It was built under the rule of emperor Vespasian in the first century AD. It is believed that Arena had the capacity to host 20 000 visitors. who sat on the steps made of stone or stood in the gallery.

Pulska Arena (The Pula Arena) was also used in medieval times, as a site of jousting tournaments. Today in Pula there is a movie festival, in which winners take home the recognition called Zlatna Arena (or Golden Arena).

The town is also famous for the Temple of Augustus, dedicated to the first Roman emperor as well as to the goddess Rome. It was used as a temple, church even silos, until it was finally changed to a museum.

Every visitor of Pula should also pay attention to the Arch of Sergii, built in the first century BC, by the family of Sergii, otherwise notable town’s family.

In the vicinity of the town, Brijuni National Park, an island used by the former Yugoslav leader for formal meetings and holidays of President Tito. This park is one of the most visited attractions in Istria. More info how to visit Brijuni and other islands nearby check this link.

Pula offers many architectural gems, but also beautiful beaches, chance for fishing and diving, thus encircling a perfect vacation site. This is one of those places really worth visiting.

As the main Istrian transport and travel hub, the town it is well connected by buses and ferries.

Getting there by bus

– selection of bus option to reach Pula is here

Istria is a region of many diversities and beauties. Over the course of history, this region went through many turbulent periods. Many powerful empires waged their wars and shed blood to control this county in the west of Croatia. When one has in mind the particularities of the geopolitical position of the Istria, it is not difficult to discover why this is the case. The game was simple- whoever had the Istria, had a big chunk of the sea, and along it came great benefits of trade. This is especially the case with Pula, the biggest city of the region and the main character of our story.