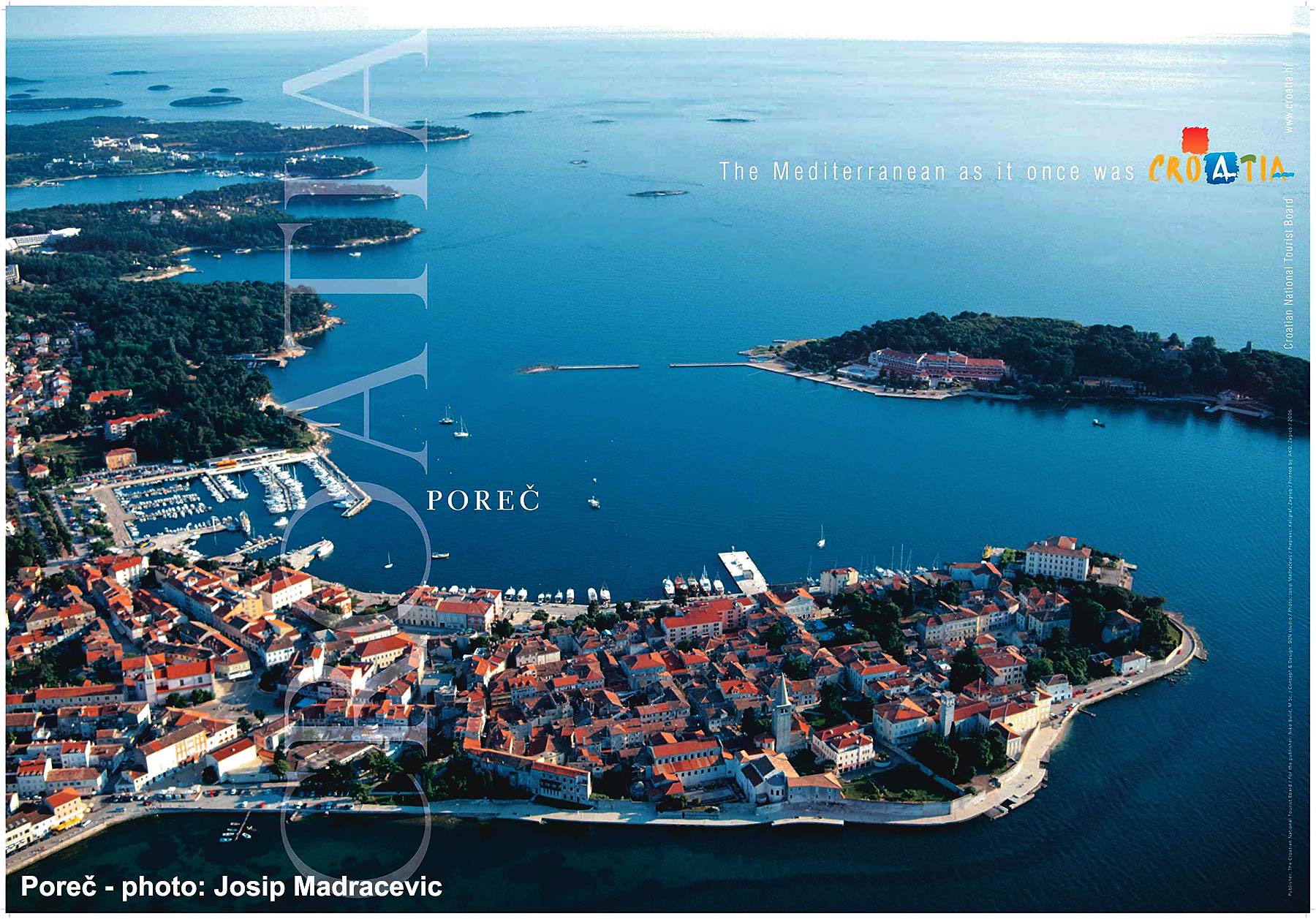 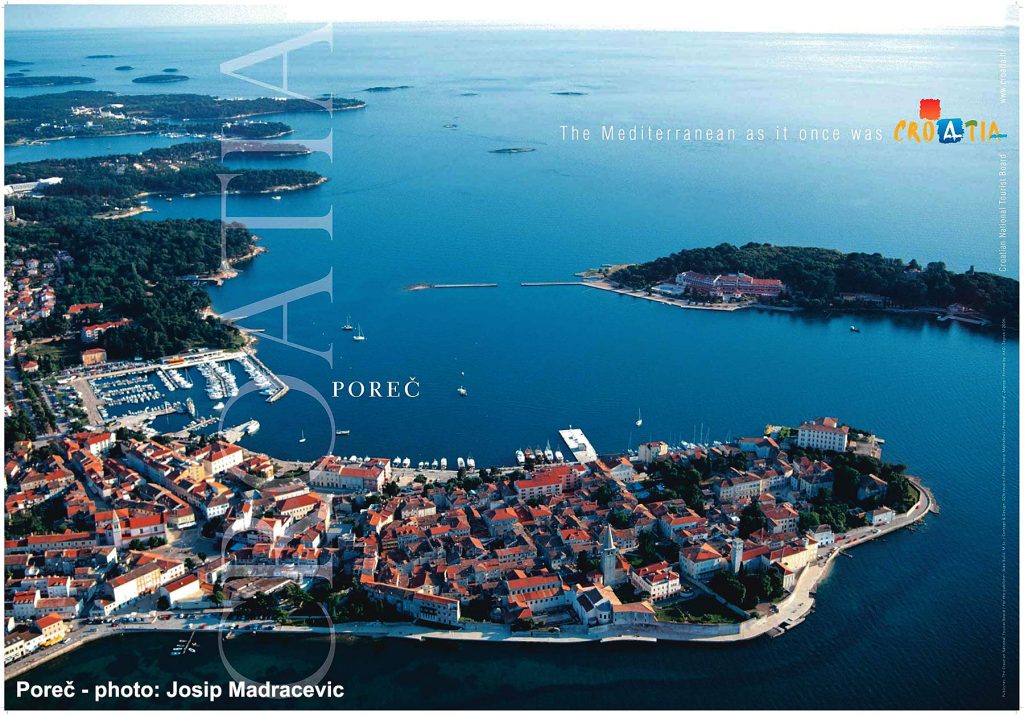 On the first glance, what seems remarkable about the city of barely 17 000 residents on the very western part of Croatia?  Nothing in particular, many would say. However, if one knows that this little city was first introduced by no other than a member of Austro-Hungarian aristocracy and that it has so many hotels which provide over 90 000 beds, a number which exceeds the number of citizens by far and wide, then one has to think again. He has to think and ask another question- what is the story of Porec?

Porec is a city located on the Istrian Peninsula and it is the second largest city in this region. This city is a port and harbour surrounded by the island of Saint Nicholas. The town itself consists of old city core as well as three little islands – besides aforementioned Saint Nicholas, there are Regata and Altijez. Furthermore, there are numerous island-like formations that belong to the city.

The climate around here is very mild, summers are warm, but swelter is scarce. Porec is a very sunny city, with approximately 10 sunny hours per day. Vegetation is typically Mediterranean and plentiful, due to a special type of soil, called ruddle, which is extremely fertile.

The history of the town:

The history of Porec goes way back to the prehistoric times. There is data obtained by ancient Greek philosophers, which observes that a fishing settlement was built on the territory of today’s Porec as early as in 6th century BC. This region was also interesting to the Romans, who built their famous “castrum”, or fortified city here. Romans made a geometrically appealing array of the streets, as well as walls on all the sides of Porec, except for the West. That part of the city was reserved for a temple.

Porec was an essential stronghold in the Christian times of Rome – the city had its own diocese with a bishop in the third century BC. Nevertheless, Christian community underwent through a great deal of suffering during the persecution of Christian throughout the rule of the emperor Diocletian. Among the persecuted Christians was Maurus who was later proclaimed a saint and was chosen as a city patron. Another bishop of Porec, Eufrazije, decided to build a beautiful basilica in 6th century, which remains the main attraction of Porec even today.

After the fall of the Roman Empire, Porec went through the unstable period in which many conquerors took reigns of the city, including Ostrogoths, Byzantines and Franks. Porec was even independent for a short period in the 12th century, when many Istrian cities formed communes of a sort, but that did not last for long. Porec was put under the Aquilea and ultimately became a vital part of the Republic of Venice, and it stayed there for five centuries, until the fall of the Republic.

Porec greeted 19th century under the siege of Napoleon and after the demise of French conqueror, got under the rule of Austro-Hungarians. This was the period of great progress for Porec (the city was renamed to Parenzo), as it improved its judiciary, educational system, and also became a favourite resort for members of Austro-Hungarian aristocracy, including archduchess Stephanie herself. After the end of WW1, Parenzo was annexed to Italy, and after WW2 it got its name back and became a part of Yugoslavia, and ultimately independent Croatia, where it remains today.

As we can see, Porec surely had a bumpy ride throughout the history. Nonetheless, it should not come as a big surprise, due to the great position of the city and its natural beauty. Aside from some profit from the food industry, Porec realizes a vast majority of its income from tourism, even though it is relatively unknown to the people outside of Croatia, with the exception of Slovenians and Italians, who consider Porec as a perfect place for getaway weekends. More than 100 000 people can be found in the peak of the summer season, and it could only be imagined what profit could be achieved if Porec had the better promotion.

When one sets foot in the town, it is easy to see why it has so many visitors per year. A lot of traces of the Roman architecture are left and it gives an unusual feel to the city, as if one goes through the filming of a sword-and-sandals movie. Perfectly aligned streets, built in the traditional Roman style are embodied in the streets Dekumanus and Cardo Maximus. An easy stroll through the streets takes one to the fascinating Five-angled tower, which as built in the 15th century. Not far away lies the House of Two Saints, a medieval monument, which owes its name to the two engraved depictions of the saints on the first floor.

Porec is a home to the Great Temple of Neptune, which was built in the early first century. And of course, it would be unreasonable to talk about Porec, without mentioning Euphrasian Basilica, which was put on UNESCO’s list of world heritage. It was built in 6th century, by order of bishop Eufrazije, and it is renowned for its highly preserved mosaics, a valuable trace of Byzantine architecture.

On the outskirts of Porec, fans of speleology can enjoy the beauties of the cave Beredina. People built their impressive monuments in the city core, and nature did the same in Beredina, which is opulent with cave jewelry and complex underground passages. For those interested in the off-beat and quirky tourist attractions, there is Traktor Story Museum- a place near Beredina which is basically an exhibit of tractors used in agriculture in the early 20th century.

The town is well connected by fast ferries with Venice and Trieste in Italy :

If you plan to get to Porec from Croatia, the best way is to use bus – see all buses going to and from Porec directly. The main bus hub in Istria is Pula, so check for Pula bus destinations and change bus there for Porec (see Pula to Porec bus timings & Porec to Pula. Also see Rijeka bus timetables if anything is suitable for you particular travel route (check Rijeka to Porec bus / Porec to Rijeka bus )

If one thinks that it is everything that Porec has to offer, he has another thing coming. It would be difficult to list all of the architectural feats accomplished in this city. Great walls, remains of towers, the beauty of incredibly beautiful lagoons are to be seen and felt, not described. And that is perhaps the best way to conclude the story of Porec- it is a city that must be felt, and not seen.