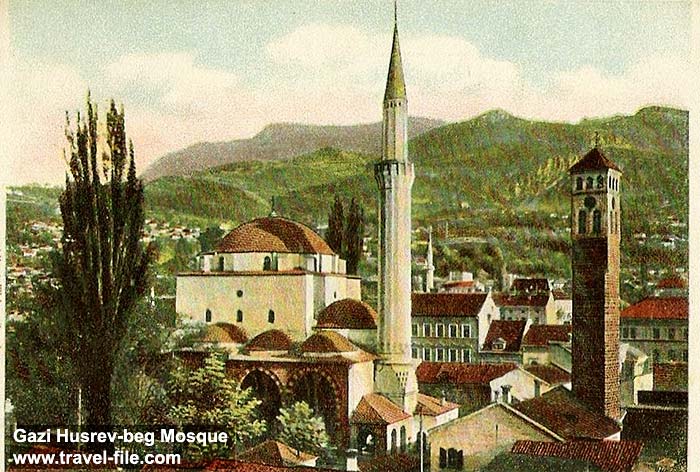 It is remarkable how the greatest beauties often lie in the last place you would expect. Take for instance the region of the Balkans- this area is widely known for its bloody history, conflicts and is often associated with war. However, as its name proposes, (Balkan means blood and honey in the Turkish language), the Balkans is not all about the gore. Exquisite sites are to be seen here as well. Just take Bosnia and Herzegovina, that hidden gem, and everything will be clear to you. This country remains the land of variety, complexities and immense grace, and Sarajevo, its capital, is the best example for this claim.

It is commonly said that Sarajevo was created as a result of the meeting between East and West. And indeed, there were many occasions when this city proved to be of historical importance – one may just need to remember that WW1 began in this city when Gavrilo Princip shot the archduke of the Austro-Hungarian Empire. But one step at the time.

Located in the centre of the Bosnia and Herzegovina, in the valley of Dinaric Alps the city presents the vital crossroad and it is the leading city of the entire country. Its rich history, multicultural society and complex relationship within earned Sarajevo the nickname “European Jerusalem”

There is plenty of evidence that Sarajevo was inhabited way back in the prehistoric times, as remains of settlements were found in the area of Butmir which indicate that this region was inhabited more than 2000 years ago. Nevertheless, the real story of Sarajevo begins with the Ottoman Empire, as it is usually the case with the Balkans. Sarajevo even owns its name to Ottomans as “saray” is a Turkish word for “palace”. It was founded in the mid 15th century when Ottomans merged several villages and connected them with a marketplace and “saray” or a governor’s palace. For many centuries, Sarajevo was an important stronghold in the territory of the Ottoman Empire. Nevertheless, as Turkish influence grew weaker, and Bosnia was annexed by the Austro-Hungaria in 1878, Sarajevo instantly became the base of the new conqueror.

It is at this time when Sarajevo gained fame. Austria-Hungaria developed the behindhand infrastructure, built railways and railroads. It is interesting that Sarajevo was the first city in Europe to have an organised tram network. In 1914, Gavrilo Princip assassinated Austrian archduke Franz Ferdinand, thus giving the cause for great powers to begin WW1. After the war, Sarajevo became part of Yugoslavia in its many incarnations and even organised the 1984 Winter Olympics in the process. Unfortunately, the city left remembered for the bloody outcome of the breakup of Yugoslavia, which was especially horrific in Sarajevo. Many people died, the city was devastated and it has been recovering ever since. Nonetheless, the city seems to be improving, and the increasing number of visitors from year to year just seem to prove it.

Things to do in Sarajevo

As Sarajevo was the host of the Winter Olympics, it is only natural that mountains are the must-see of each tourist who comes to the “European Jerusalem”. There are four beautiful Olympic mountains in the vicinity of Sarajevo and one has a hard time deciding where to go first. Jahorina is perfect for snowboard aficionados and beginners; Igman is great for fans of casual skiing; if someone is open to challenges of steep and demanding tracks, Bjelasnica is the right thing for him. Whatever is chosen, one thing is for sure- fun is guaranteed.
Besides skiing, there are opportunities for mountaineering. This activity in Sarajevo has a tradition which is more than a century old, and the paths of Trebevic, another Olympic mountain, present a real treat. Aside from Trebevic, there is the fascinating canyon of Rakitnica, as well as the route to Lukomir which takes pride in its wonderful creek called Studeni Potok, as well as the autochthonous village.

People who are into mountain biking will feel like they are in heaven upon visiting the cycling paths around Sarajevo. These routes are so interesting that even “National Geographic Traveler” listed them as one of the best adventure destinations in the world.

Rafting in the above-mentioned canyon of Rakitnica is considered to be one of the most challenging in entire Europe and only the bravest are able to overcome it without the help of a guide.
Speleology is also one of the recommended activities when one comes to Sarajevo, as this region is renowned for the presence of a lot of staggering caves with beautiful and long chambers. This is the case with Megara, a cave famous for its remains of the cave bear, and Orlovaca, which is a home for many endangered animal species.

The city is famous for its numerous cultural monuments. It could not have been different for a city with so rich history and deep cultural mix. In the great variety of cultural and architectural content, Baščaršija is certainly a place which sticks among the rest. This is the oldest part of the city, built in the 15th century. It is virtually intact by modern technology and presents a cultural brand of Sarajevo. Many beautiful edifices like Gazi-Husrev Beg Mosque, built in the 16th century, or Sahat-kula (a clock-tower) can be found here. Many tourists especially prefer Svrzina Kuca, which is a house built in traditional style, which gives a unique feel of the days of yonder. The presence of many traditional restaurants shows why gastro-tourism is one of the strongest points of the city.

The Austro-Hungarian influence in architecture can be seen in the centre of the city – Hotel Europe and City Hall are excellent and lovely examples of the effective Austrian style.
Sarajevo is also opulent with museums and galleries. The Olympic Museum is a starting point for any sports fan, whereas the Jewish Museum and Historical Museum give an important glimpse of the events that made Sarajevo such a distinct city. Art lovers will be interested in visiting the Art Gallery of Bosnia and Herzegovina as well as Collegium Artisticum. If one happens to be in Sarajevo in August, he is bound to be a part of Sarajevo Film Festival, one of the most prestigious film festivals in Europe, always abound with stars of the world cinematography.