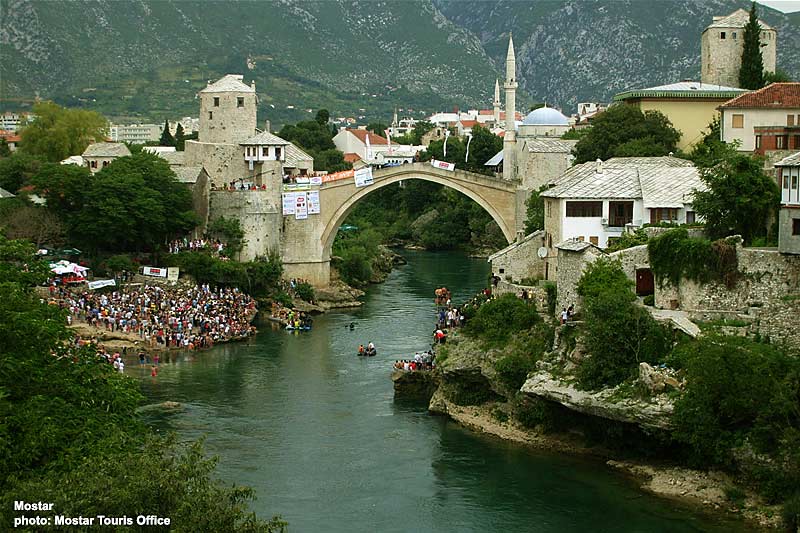 Panorama of Mostar with Old Bridge across Neretva river

Getting there: Bus to Mostar

Visiting Mostar – Mostar in a nutshell

Bosnia and Herzegovina is a land of various and distinct beauty. It could be said that variety in its natural lore is rarely to be seen anywhere else in the world; for this country possesses great, long valleys, it has several Olympic mountains, wild rivers, access to the sea and even a primeval forest. Same goes with the man-made environment- in cities all over BiH, one can catch a glimpse of prehistoric influence, Turkish as well as Austro-Hungarian architectural and cultural influences mixed with Slavic autochtonous touch. Mostar is no exception to this rule.
Located on the Neretva river, Mostar represents the leading city in the region of Herzegovina in the south of the country. Due to its geographic position, Mostar is marked by the mild climate and it is known for being one of the leading cities in Europe when it comes to the number of sunny days.
The story of Mostar begins way, way back, as it was discovered that human settlements in this area existed even in the time of prehistory. However, the foundation of the city itself is linked to the 15th century, when two towers were built on the banks of Neretva, called Tara and Helebija. These towers were supposed to defend the city from the Ottoman conquest, as well as the bridge which was an essential strategic point. Moreover, the bridge was of such importance that specialized guardians called “mostari” were supposed to guard it, hence the name of the city (most is a native word for a bridge).

Nevertheless, Ottomans did seize Mostar and left a lasting mark which remains even today. The most important thing they did was the built of the “Old Bridge” in the 16th century, a monument which has become the trademark of the city until its unfortunate destruction over the course of the Bosnian Civil War in the nineties. However, it was renewed and reopened in 2004. In the 19th century, Ottoman Empire was at deathbed and Austro-Hungaria took over the reigns of the territory of Bosnia and Herzegovina, Mostar included. In this time many roads and buildings were raised which stand even today, more than century later. After WW1, Mostar, along with the BiH was a part of Yugoslavia in its many forms, until its final disintegration in the 90’s, when BiH became an independent country. After the war, Mostar started rebuilding itself, a feat which is still in the process, yet many people come to see many attractions of the city year after year.

Things to do in Mostar

Since Mostar is the largest city of Herzegovina and it presents the transportation center of the region, it is the best starting point for tourist explorations. Its position puts Mostar in the vicinity to many natural beauties which are sources of outdoor activities such as trekking, rafting, and climbing. That is the case with Ruište, a mountain village, which is only 25 kilometres away from the city itself, yet presents a treat for the alpinists eager to conquer the mountain of Prenj, especially its peak called “Zelena Glava” which is situated at the height of 2155 meters and provides a staggering view. Fans of trekking can find great joy in visiting Vjetrenica cave, which is a system of canals that can stretch to six kilometres. Fans of uncorrupted nature might wish to visit nature reserve called Hutovo Blato. This system of marshlands is especially attractive for birdwatchers, as many of the protected species live only in this part of the region. Mostar also offers opportunities for those addicted to adrenaline. The river of Neretva is renowned for its rafting trips and one-day excursions that often remain as the greatest memory for those who leave Mostar. This city is also close to Međugorje, a famous religious site which is famous around the world for many pilgrims who come in hope to see Virgin Mary.

Apart from many opportunities for various outdoor activities, Mostar is also rich with cultural landmarks. As it was previously stated, Mostar, just like the rest of the country, was exposed to many cultural and architectural influences over the centuries. And when one starts to talk about them, it is only logical to start with the Old Bridge, When you ask a citizen of Bosnia and Herzegovina what is their first association of Mostar, the majority will surely say the Old Bridge. This fascinating landmark was built in the 16th century by the famous Turkish ruler Suleiman the Magnificent. It stood firmly for more than four centuries when it was torn down in 1992 during the war. It was renewed in 2004, though, and today is listed on UNESCO’s World Heritage List. The bridge is also known for the annual diving competition when many people all around the region gather to compete, a tradition that lasts for centuries.
Aside from the Old Bridge, there are other interesting places to see, such as Kujundziluk. This place is bound to bring back a visitor several centuries in past. It is the oldest part of the city and still looks very much as in its early days in the 16th century- one can still see traditional stores which are long extinct in other parts of the city, narrow streets, and cobbled areas. Traditional restaurants prove why local cuisine is the happiest memory of every tourist who comes to BiH.
For architecture buffs, there is a lot to see, from above mentioned towers Tara and Helabija, which proudly protect the bridge, four centuries after their construction, all the way to Turkish baths and fascinating medieval tombstones, called stecak, which is typical for this part of Europe. The cultural mix is especially visible in the religious monuments- Mostar takes its pride in some of the most beautiful religious objects from Islam, Catholicism and Orthodox Christian church. And as that is not enough, in the close proximity of Mostar, there are remains of ancient Roman basilica.
Austria-Hungarian also left its trace in architectural department, especially when it comes to religious residences such as Biskupski Ordinarijat or Vladičin Dvor, or schools such as Stara Gimnazija, the most prestigious school in the city.