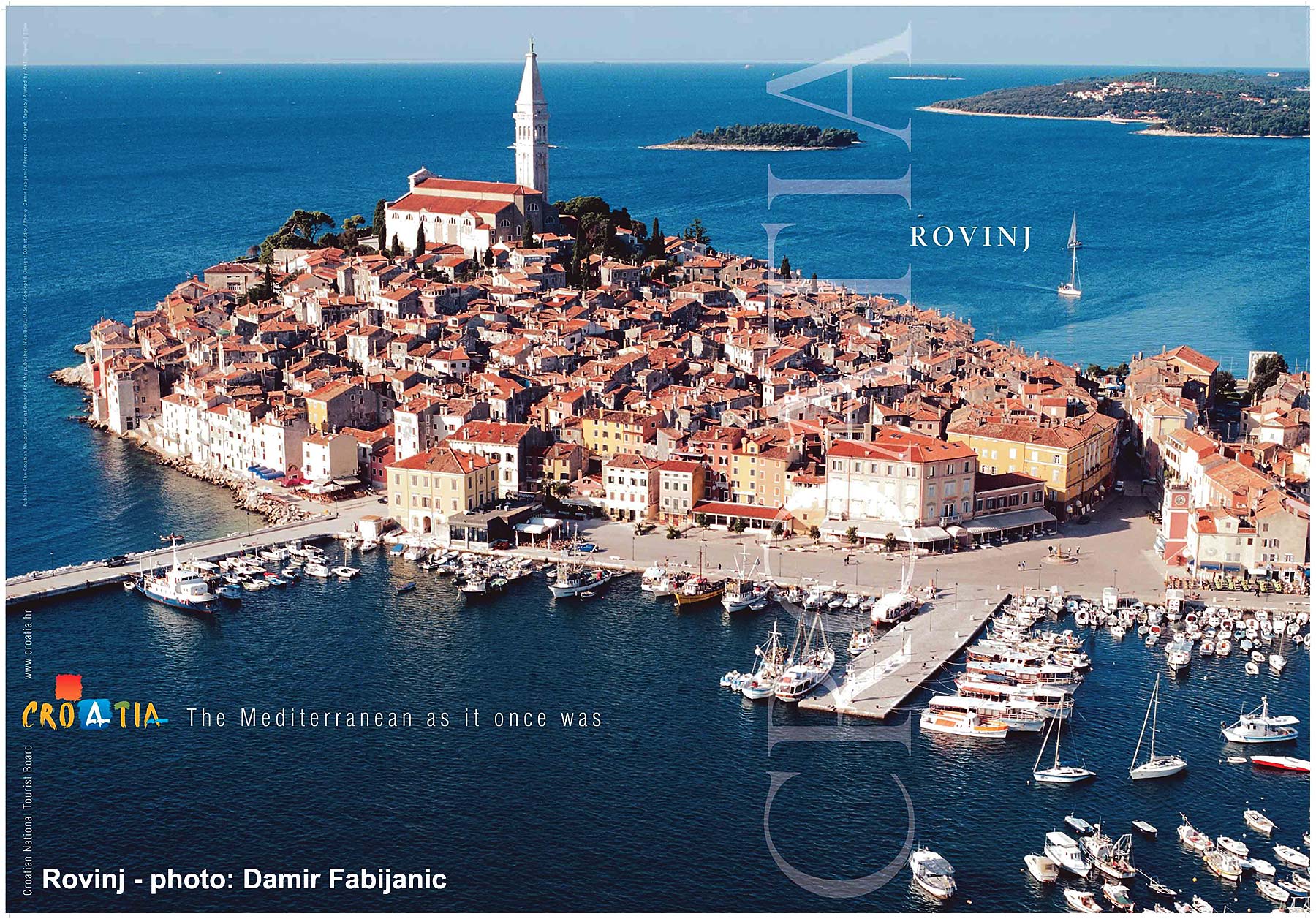 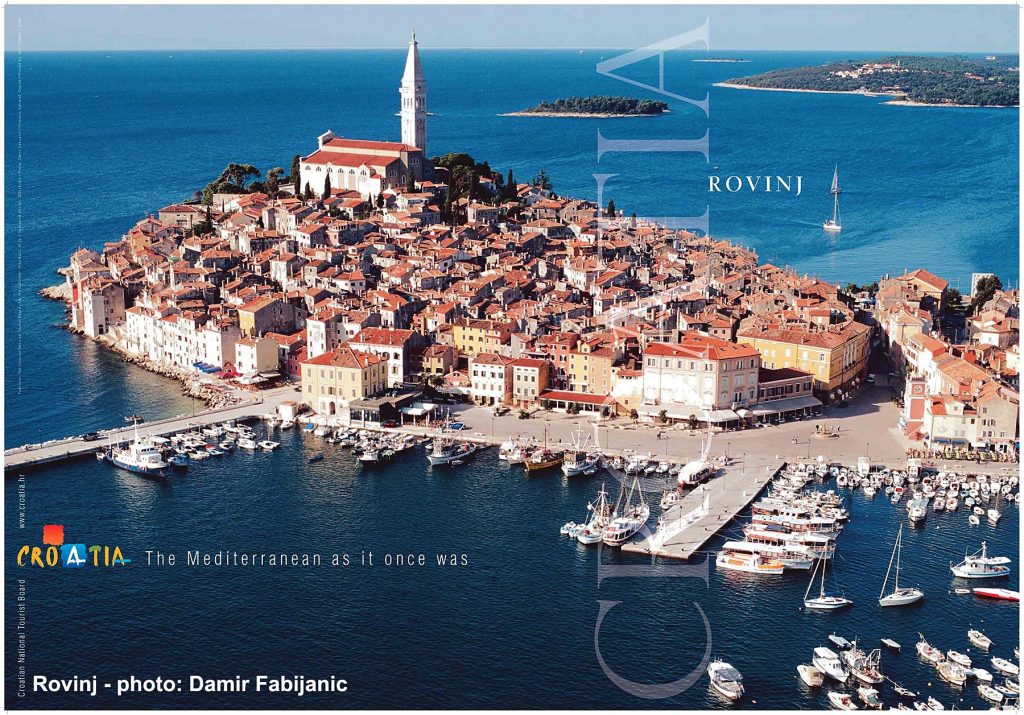 Rovinj,  a town in the western part of Istrian Peninsula, one of the most attractive regions of the country. Along with Porec, it is the most appealing visitors site not just in Istria, but in the whole Adriatic Sea in general. It is characterised by the Mediterranean climate, with many sunny days throughout the year and exceptionally warm summers.

The wider area of Rovinj is located in the middle of land rich with ruddle, which goes in flavor to the growth of various vegetative species. The town is in a sense decorated with a distinctively breached archipelago which consists of 14 islands, most notably Sveti Andrija,  Crveni Otok (Red Island) and the island of Saint Catherine (Sveta Katarina).

Rovinj is a very industrious city, a fact that possibly may not be deduced at first glance. Tourism stays the most important branch of economy, nevertheless, other branches of industry found their place in Rovinj, as it is the case with the tobacco factory and can manufacturing company. Fishing is a traditionally strong point of the economy here. In the past, most of the citizens had their own boats and actively worked in fishing while today it is a hard work to preserve this traditional trade.

There is a scene in the movie “Days and hours“, in which one of the characters gets an invitation to go and live to Rovinj. The character gets baffled and asks his neighbour:”Is Rovinj in Croatia or Slovenia?”, and his neighbour replies:”In Croatia, it has always been in Croatia”. This may sound as an innocent conversation, but the underlying context is obvious – Rovinj presents a beautiful piece of land, desired and yet perplexing.

History of Rovinj (or Rovigno as for its Italian name) is fairly similar to the fate of the Istria. The area of the city was inhabited in the prehistoric times by the Illyrian tribes. Illyrians found their settlement on the outskirts of today’s Rovinj and made business transactions with Greeks and Etruscans. The transition between prehistory and the new era, as well as the first couple of centuries met Rovinj under the rule of the Roman Empire. The Romans named the city Mons Rubineus or Arupinius, which later changed to Rovigno and finally- Rovinj.

The period of Roman rule went relatively peacefully, unlike the period that came after the fall of the Empire, which was hectic. Rovinj was pillaged by various tribes, mainly Visigoths and Huns. The period of consolidation emerged after Rovinj became a part of the Byzantine Empire, but it was not meant to last as it was taken over by the Franks. In the centuries to come, the city fought for any kind of independence or at least autonomy, and it had a status of an autonomous city from 10th till 12th century. However, in the end, Rovinj was integrated into the formation of the Republic of Venice, where it stayed for five centuries, just like most of Istrian Peninsula.

After the demise of the Republic, citizens of Rovinj managed somehow to regain autonomous position, maintained under the rule of Napoleon, as well as the Austro-Hungarian monarchy. Maritime business and transportation were so improved that in the first half of the 19th century, Rovinj was the second leading port of Istria. Nonetheless, after the end of WW1, the city was annexed by the fascist regime in Italy, and it became a part of the province Friuli-Venezia. Still, the events of the WW2 reshaped the position of European borders, and this was the case with Rovinj, too. In 1947, it officially became a part of Yugoslavia, and ultimately, after the breakdown of this country, Rovinj became Croatian.

The town is an extremely popular tourist site both among Croats and foreigners. Approximately 15% of income from tourism in the Istrian county is made here. Most tourists are citizens of Germany, Austria, Italy and the Netherlands. Many hotels, as well as campsites, boost hosting capacities year after year. The shores of Rovinj are well known for their diversity and rocky capes. Local authorities put a lot of effort to make town beaches even more appealing, thus new beaches that are comprised of tiny specks of gravel are increasing. The outspread of the shores of Rovinj present a great challenge for divers, who can come across various flora specimens, as well as rare and beautiful shells.

Rovinj is a city full of notable monuments as well. First of all, there is the core of the Old Town, which is basically an island connected to the mainland by a special channel. This is the place where Rovinj started its life in the age of Romans. This ancient part of the city is renowned for its ancient, narrow streets and unique chimney construction not visible anywhere else in the region. This peculiarities were the best recommendation for this part of the city to become a monument of culture.

Besides the Island, another attractive tourist attraction is the Town Hall. It presents the residence of the mayor and its construction started as early as 1308. It is interesting that the lobby was once used as a jail.

The main square of Rovinj is a home to the city clock tower or Gradska ura as it is called by citizens. It was built in the 12th century and went through a lot of reparations in the centuries to come. What is especially interesting is the fact that the bottom of the tower hid another jail, for petty thieves and less violent law offenders.

Balbi’s arch is another interesting piece of architecture that town has to offer. It was once used as the official gate at the entrance of the city. Its construction goes back to the end of the 17th century.

All things aside, St Euphemia’s basilica probably poses as the most famous architectural feature. It took 11 years to built, from 1725 and 1736, and it presents a massive edifice with 50 meters length, and 30 meters width. The construction of the bell-tower was an even more arduous task, as it was shaped according to the bell-tower of the Church of St Mark in Venice. Its construction lasted for 26 years and was ultimately decorated with the statue of Saint Euphemia.

What to say about this town than to call it a little giant. Many surprises hide in this gem of Istria, and it is no wonder that characters from the beginning of this story perceived it as a remote slice of heaven.

The town it is well connected by buses and ferries from nearby places as well as from Croatia’s main towns like Rijeka, Pula, Zagreb, Zadar, Split..